Noteworthy thinker and essayist Baishnab Charan Mohanty observed that, inclement attitude of administration and lackadaisical concern of persons in Orissa politics are the main factors behind the loss of primacy of Oriya language in Orissa.
Addressing the people live from the digital platform of Bhasha Andolan, Bhasha Maapain Pade, he pointed out that the beloved mother tongue of the people has been pushed into atrophy, because of the State’s blatant failure to retain its utility-stamina, with the Orissa Official Language Act kept deliberately dormant.

The movement’s Black Flag Campaign having been kept in abeyance in view of COVID19, Facebook-Live has been adopted as its new method and eminent Oriyas have been supporting the campaign through this media every Monday at 10 AM.

Here is the speech of Sri Mohanty:

theNEWSsyndicate
Addressing Orissa in the matter of its governance in Oriya language, the purpose for which the province was created, former Director of Odia Bhasha Pratisthan and eminent scholar on Jagannath Cult, Prof. Harihar Kanungo observed that the Law proposed by the founder of Bhasha Andolan, Subhas Chandra Pattanayak should be honored, in order to remove all obstacles from the path of implementation of the Orissa Official Language Act, 1954. This movement is the movement of Oriya identity, he maintained.

Below is his speech, which was live in ‘Bhasha Maapain Pade’ page of Facebook, which is the digital page of its celebrated Black Flag Campaign that reached 1580 days today, the like of which is seen nowhere in the world.

Speaking live from the digital platform of Bhasha Andolan, where its celebrated Blackk Flag Campaign is continuing in the global network,as the physical campaign has been postponed for helping the Govt.to concentrate in management of COVID19, Prof. Dr. Arabindo Das opined last Monday that, governance of Orissa, the State created on the demand of the people to be governed in their mother tongue, cannot be countenanced in any non-Oriya language. He called upon the people to be united for the cause of the Oriya Language.

The Delhi High Court has saved Ms. Jaya Jaitly from imprisonment by way of a “stay” on the CBI Court’s verdict that had to overcome all the acts of browbeating the law for around two-decades to reach the decision that she and her co-accused were guilty of the offence exposed by the news portal Tehelka in January 2001 in its sting operation styled ‘Operation West End’.

Instead of acting against the exposed offenders, the political government had subjected the portal to prosecution.

I had discussed the matter at a critical juncture of the case, raising a demand for inquiry against Vajpayee along with Fernandes. It was captioned: VAJPAYEE BE ENQUIRED INTO IN CONTEXT OF FERNANDES.

Had it been possible, that dark chapter of Vajpayee Raj could have come to light. He is dead, so also Fernandes. The dark chapter has remained dark.

Against this backdrop, when the appropriate Court has found the living ones of that exposed coterie guilty of the offence, which is, in reality, no less than treachery against the Country, I feel, the High Court should add no more years to the delay in justice, which the country is crying for.

Therefore, it should fix a day by which Ms Jaitly shall have to prove that she is not guilty.

No adjournment be allowed and the verdict of the CBI Court be fully operational if she fails to prove her honesty and innocence on that day.

Higher judiciary, in such cases, should be disciplined enough not to add to years of delay in justice.

Eminent human-rights educationists with a National Law School of India University background, Sri Pradipta Nayak came down heavily upon the State Government today in his Facebook-Live address on the issue of governance of Orissa in Oriya.

The Oriya race had forced the British to form this first linguistic State in its dominion in 1936 for the sole purpose of its administration in the mother tongue of the people i.e.Oriya. And the First elected Assembly as per Constitution of India had enacted the Orissa Official Language Act in 1954 for use of Oriya as the sole language in all and every official purpose. But due to wrongful amendment of this Act, firstly by Biju Patnaik in 1963 and lastly by Naveen Patnaik in 2018, all businesses of the State are running in English instead of Oriya.

Bhasha Andolan, founded by senior journalist Subhas Chandra Pattanayak has forced the government to amend the Act to ensure that the State is run without fail in Oriya language. Under its pressure the State Government has inserted Section 5 in the Act as per the draft legislation proposed by Sri Pattanayak in the Ministerial Committee to which he was nominated as a member. From the set of Rules he had given, Rule 5 and Rule 8 have been adopted by the State in different Acts. But in the Act itself, the non-Oriya- dominated bureaucracy, taking advantage of the Chief Minister’s aversion towards Oriya Language, has shrewdly inserted section 4 and section 4-A in 2016 and 2018 respectfully, a mischief that severely impairs the operational ability of the Act. As Sri Pattanayak challenged the illegality in creation of these two sections, the government, in order to appease him, has honored his demand for quashing of Section 3A by redefining Oriya as the “Official Language” in the “Statement of Object and Reason”in a 2018 amendment, but the two mischievous sections have not been repelled. Therefore, the Black-Flag campaign continues, which has become virtual in place of physical under the compulsion of COVID-19 Code.

In the changed pattern, over and above campaign updates in social and web media, the movement is organizing a weekly video-conference of the activists every Sunday evening and a Live speech in Facebook by an eminent Oriya in support of the campaign. Sri Nayak’s speech, this forenoon, was a part of this pattern. Here is his unedited speech: 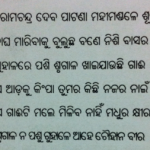 Chief Minister Naveen Patnaik seems to have developed a wrong notion that governance of Orissa in Oriya depends upon his mercy. His press-note of December 17 and full page display advertisement in major broadsheets of today force us to arrive at this apprehension.

In his December 17 press note it was declared that he had held a meeting with the five members of the ministerial committee on that day for the purpose of “strictly implementing the Orissa Official Language Act, 1954 in official and non-official level” to facilitate which a website has been floated by the government. In the full page multi-color advertisement in broadsheet dailies today, this is intriguingly missing.

The advertisement is designed to tell the people that Chief Minister Naveen Patnaik has taken historical steps to save and develop Oriya language, and has enumerated the steps he has taken. This is blatant lie. Neither he nor his government has executed any single item claimed to be “historical” in the official advertisement. The entire advertisement is nothing but false propaganda. What a shame it is, that, the people of Orissa are taken for granted by their Chief Minister! END_OF_DOCUMENT_TOKEN_TO_BE_REPLACED

Legends are the most misguiding mischief aimed at superimposing lies on reality so that indigenous people of an occupied land are kept too dazzled to see the dark face of the rulers and the class of exploiters can keep its victims subjugated to its authority, while forcing them to forget the heroic history of evolution of their own philosophy of life, their own splendid spiritual realizations, their own socio-economic uniqueness, their own ancient culture, their own valorous past, their own way of social integration and their own civilization.

We see this mischief galore in the context of Navakalevara of SriJagannatha.

So, here, we are to rip apart the legends and bring the reality of the Navakalevara to light, as thereby alone we can reach the lost uniqueness of the people of Orissa.

We will use Puri Sankaracharya’s self-proclaimed authority over Navakalevara to proceed with our purpose.

END_OF_DOCUMENT_TOKEN_TO_BE_REPLACED

The Oriya daily SAMAJA founded by late Utkalmani Pandit Gopabandhu Das, to which, out of their love and reverence for the great humanitarian leader, the people of Orissa had and have been giving their financial and moral support, is in a menacing maze of forgery and loot.

Sadly, two of Gopabandhu’s trusted men – Lingaraj Mishra and Radhanath Rath – who, because of being known so, had the opportunity of becoming cabinet ministers in Orissa, were the masterminds and/or makers of the forgery from which the paper is yet to be salvaged.

Both of them – Lingaraj and Radhanath – had partnered with each other in forging the last WILL of Gopabandhu to grab the Samaja, which being Gopabandhu’s paper was of superb credibility and the greatest political instrument of the day. They had performed this crime behind the screen of and in nexus with Servants of the People Society (SoPS), of which, while breathing his last, Gopabandhu was the Vice-President. END_OF_DOCUMENT_TOKEN_TO_BE_REPLACED