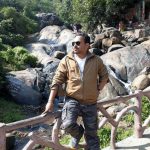 Uday Mishra, an individual of marked individuality, a mathematician who, being so, represents the thinking mind of the world despite living in Balasore of Orissa, a pure person who enjoys facing the unpredictable and helps studying the share-trend, is, by orientation, a strong opponent to forces that divide the society for financial and political gain.

I found in his Facebook timeline posted an hour ago 3 pictures with shortest possible introductions that I prefer ORISSA MATTERS to carry. Here is what he has posted: 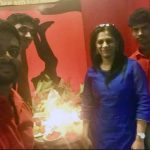 She is Salma Pathan,who lives in Bangalore. She owns a CAFE. Recently awarded by Karnataka govt.

SHE PERFORMED “LAXMI PUJA” AT HER CAFÉ. 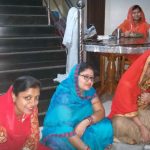 She is Shabana Khan, who lives in Sambalpur. She is a housewife .

She was eating LAKSHMI PRASAD at her colony with Hindu friends in a Hindu’s house.

She is daughter of Neelu Shaik Amjad, a house wife, who lives in Bangalore. She dressed her daughter like lord Krishna in JANMASHTAMI.

Thus sharing with us, Uday says:

“I think I shouldn’t say anything more…
(Bhakts..this is gharwapsi.. right?)”