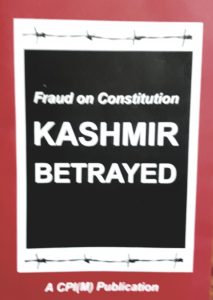 The Communist Party of India (Marxist) has brought out a reality analysis of the situation to which the ‘Heaven on Earth’ (ଭୂସ୍ଵର୍ଗ) of India has been subjected to with abrogation of the special status the founding fathers of our country had given it under Article 370 of our Constitution. It has aptly captioned the analysis as “Fraud on Constitution” and called upon “all citizens who believe in the values of the Indian Constitution to come together and unitedly stand shoulder to shoulder with the people of Jammu & Kashmir for the restoration of Statehood along with democracy and full autonomy to J&K.”

The need of special status for Jammu and Kashmir “arose from the way its accession to India took place in the period of 1947, when a Muslim majority State preferred to accede to a secular India and not a Muslim majoritarian State that Pakistan had set out to be. Article 370 was a solemn guarantee that Indian State gave to the people of J&K, that we would respect their identity, as we have done for many other States and Regions under Article 371”, the CPI(M) has noted, while condemning the Modi Government’s arbitrary action that has “betrayed this promise by virtually scrapping Article 370, striking a body blow to the federalism in the Country.”

Pointing out that, unlike what the BJP propaganda has painted, “J&K is not the only State to have special provisions”, it has shown, “Similar special provisions exist in Article 371 for other States” such as Maharastra, Gujarat, Arunachal Pradesh, Assam, Himachal Pradesh, Manipur, Meghalaya, Mizoram, Nagaland, Sikkim, Tripura, Uttarakhand, Goa and Karnataka” where under the said Aricle, from Sub-Clause (A) to (I), “buying of land and employment by others except permanent residents” is “prohibited”.
“Tomorrow under this or that pretext the special provisions for other States may also be scrapped” citing the precedence created in J&K, the CPI (M) document has portended.

Diving deep into the situation that had necessitated the protection of the uniqueness of J&K, the document, which is the first political document of factual analysis of post 370 position, gives us how the Muslim majority there had forced the Hindu Maharaja Hari Singh to accede to India than joining Pakistan or remaining a permanently trouble-making Monarchy.

“The British were interested in keeping Kashmir independent for strategic reasons, maintaining the Monarchy.” Maharaja Hari Singh’s version is noteworthy. “I wanted to take time to decide which dominion I should accede, whether it is not in the best interests of both dominions and my State to stand independent, of course with friendly relations with both.” But the people of Kashmir, majority of them being the Muslims, led by Sheikh Abdullah under the banner of National Conference, raised a great revolution to get rid of the Monarchy and had forced the Maharaja to accede to India.

Under the Monarchy, even as Maharaja Hari Singh was appropriating one-third of the total revenue of the State for his personal expenses, big landlords were having their ownership over most of the lands leading to an impoverished peasantry. Therefore, the majority of the people of the State, like in all the Princely States of India at that time, exploited to the core, had raised the slogan of Quit Kashmir against the Maharaja, which the National Conference, similar to Praja Mandal of Dhenkanal, had built up and espoused. RSS, as is its wont, was with the Maharaja and the landlords against the toiling masses that were united under the banner of National Conference to end the system of exploitation. This unique movement, absolutely secular, had not only to defeat the feudal rule, based “largely on huge concentration of land and extreme exploitation of the people”, but also to defeat the design of All J&K Muslim Conference that was campaigning for the Monarch to accede to Pakistan.”

On this peculiar reality, when the general people of J&K succeeded under the secular banner of National Conference to defeat the design of Hindu Communal Forces led by RSS supporting the landlords, as well as Muslim Communal Forces led by All J&K Muslim Conference demanding merger of the State with Pakistan, the Constituent Assembly of India created provisions for Special Status of Jammu & Kashmir to help the people manage their own affairs to fulfill the dreams they had dreamt of during their movement that had forced the Maharaja to accede to India. Article 370, bestowing upon J&K the status of a Special State, had thus evolved. Affixing the whole of India’s heart to this special provision, N. Gopalaswamy Ayyanger, in his speech at the time of its adoption in the Constituent Assembly on 17.10.1949, had rightly said, “This (special status) is one of our commitments to the people and to the Government of Kashmir.”

“Today under the BJP, that commitment lies in shreds”, rues the analysis document of the CPI(M).

Describing the contributions of Article 370 to save India’s “Heaven on Earth (ଭୂସ୍ଵର୍ଗ) from exploitation, the document shows how “radical measures which at that time were not allowed in the rest of India”, were possible to be taken by the Assembly of J&K in interest of the people of the long exploited State.

“First, it passed a Resolution to abolish the system of Monarchy and the special privileges of the Monarch. It thus took democratic positions which benefited the people of Kashmir far ahead of similar legislation for abolition of privy purses in the rest of India. Second, it adopted the abolition of Big Landed Estates Act and the Distressed Debtor Relief Act, 1950. Through this, the State embarked on the most radical land reforms programme, which abolished the landlords’ estates without compensation. This could be done, because Article 31 of the Indian Constitution, which protected the rights of the landlords was not applicable to the State, because of its special status under Article 370”, the document has shown.

Coming heavily down on the BJP propaganda that, Article 370 was generating separatism, the CPI(M) document asserts that this particular Article had empowered Kashmir to have her own Constitution, on the basis of which the Constitution of Kashmir could be able to declare under its Artcle 3 that, “Kashmir is and will be an integral part of India.”

“How then can it be said that this leads to separatism?” CPI(M) has asked.

Wrong to link it to terrorism

Motive behind abolition of 370

To its observation, “In the RSS-BJP narrative, the Kashmir valley is a hotbed of separatism and terrorism, because of its religious composition. Their inherently anti-Muslin bias makes them hostile to any democratic aspiration of the Kashmir people. When they advocated the abolition of Article 370, what they meant was that the people of the valley have to be suppressed under a security-State apparatus.”

“They want Kashmir, not Kashmiris: their nationalism is of the land, not its people. For them, it is not people who make a nation, but only its borders and the land”, has concluded the analysis.