A syndicated news on police atrocity on media persons dated January 13 was as follows: 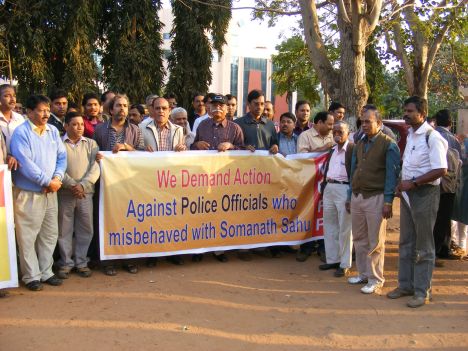 The media persons of Bhubaneswar, under the banner of Media Unity for Freedom of Press (MUFP) organized on Wednesday a rally of protest against refusal of entry to Dharitri reporter Somanath Sahu by the Police Commissioner to its press meet on January 12.

The freedom tree stands in front of the Soochana Bhawan and is so named because of regular meetings of MUFP under this tree in the cause of freedom of Press.

Dharitri reporter Somanath Sahu , though was invited to attend the Annual Crime Meeting of the Police Commissionarate , was not allowed entry into the venue by high ranking police officials. Sahu was told by his obstructors that the Commissioner of Police had instructed them not to allow any reporter or camera person from Dharitri to the function.

Sahu and other media persons present there alleged that the D.C.P Himansu Lal, S.P. Traffic, and an Inpspector of Police threatened Sahu with dire consequences if he would carry on his writings against the
policre.

Demanding the removal of the Commissioner of Police , Deputy Commissioner of Police and ACP traffic and IIC of  Kharavel Police Station for trying to gag the press, the meeting  decided to meet the Chief Minister Naveen Patnaik  on January 15 at  State Secretariat and hand over a memorandum in this regard. Among others, senior journalists- Prasanta Patnaik, Subhas Chadra Pattanayak,  Rabi Das, Tathagat Satapathy (Editor Dharitri), Gopal Mohapatra, (Executive Editor, Sambad) spoke on the occasion demanding action against the Police.

But, the CM agreed to meet the MUFP delegation on January 14 instead of 15 and accordingly a delegation led by Prasanta Patnaik met the CM in his official conference chamber and handed him over the memorandum that read:

We, the journalists of the Capital city, hereby submit that we are aggrieved over the increasing highhandedness of the Police Commissionerate with regard to objective reporting by media persons in the recent months in the twin city of Bhubaneswar-Cuttack.

The latest incident took place on Wednesday (January 12) at office of the Deputy Commissioner of Police in Saheed Nagar area where Somanath Sahu, Reporter of leading Oriya daily `Dharitri’ was threatened and manhandled by police officers and not allowed to attend a press conference there.

DCP  Mr. Himanshu Lal and some other police officers, including ACP (Traffic) Mr. Nirmal Kumar Satpathy and IIC of Kharavel Nagar police station Mr. Satyajit Mishra had told Mr. Sahu that Police Commissioner Mr. Bijay Kumar Sharma had instructed them not to allow any Correspondent of `Dharitri’ to attend the said press meet.

Mr. Sahu was also threatened with dire consequences by the police officers who forcefully prevented his entry into the hall where the press meet was being held.

Earlier during the National Youth Festival, the Commissionarate had virtually imposed such ban on the reporters and camera persons of “ Aaromv “ Oriya daily, published from Bhubaneswar since it had published some critical report against the police.

Against such a backdrop, we request you to personally intervene in the matter and immediately transfer the Police Commissioner, the DCP, the ACP (Traffic) and IIC of Kharavel Nagar police station for their unlawful and arrogant behavior  toward journalists on duty. We also demand for a high-level probe into the incidents of atrocities by the police and to take exemplary action against the erring police officers so that media persons will feel free and safe to perform their duty.

On receiving this memorandum, the CM gave it to his principal secretary and assured the MUFP delegation that he would look into the matter.

It is not for the first time that MUFP delegation has met the CM over attack on journalist and transgression of Freedom of Press.

It is also not the first time that the CM has assured of action against the involved miscreants.

But the CM has never acted as per his assurances. The MUFP delegation is also not sure this time that he will act.

The Press was to protest against the nefarious conduct of the Police against collection of information by media persons. In a dignified way befitting the Press, demonstration of disapproval of police action against the Dharitri reporter was offered under the Freedom Tree and then a Memorandum has been submitted to the CM.

Whether Sri Naveen Patnaik shall act as the CM and save Freedom of Press from repression or shall continue as a nonchalant person in the chair of the CM will be known in course of time; but at the moment it is clear that the Police has been enjoying his predicament over the issue of Freedom of Press.

By singling out the Dharitri reporter and threatening him with dire consequences if he dares to enter into the venue of the press meet, as the picture so expressly indicates, the Deputy Commissioner of Police just tried to test how the CM would react if one of his close colleague like Sri Tathagat Satapathy was to be embarrassed by denial of reporting rights to his authorized reporter.

Alas! the CM has not yet reacted!

Should it be assumed that the CM is contemptuous towards Freedom of Press or accepted that he is secretly involved with the police action against Dharitri in order to test how his party colleague Sri Satapathy would react?

Somnath Sahu’s case is a test case wherein not only the CM’s ruling ability would be mapped but also the journalistic personality of Tathagat Satapathy who has even preferred to be known as accredited reporter of Daritri despite being its editor would be judged vis-a-vis his political personality as an MP of the BJD.

It deserves mention that Tathagat is a known opponent to handing over the coastal land to Vedanta University. Even, during Biju Patnaik’s reign, he had not only opposed in the floor of the House the administrative conspiracy to hand over the coastal land to hoteliers, but also had come out with signed editorial to educate the local mass on why allocation of the land on the Puri-Konark marine Drive to capitalist concerns should be opposed. During Naveen’s regime, he has issued similar editorials that highlight the need for allocation of land to landless agricultural community instead of allotment to persons like Anil Agrawal in the style of Vedanta university. Against this background, the recent razing down of the compound wall of his old plot on the sea beach at Puri as well as the denial of reporting rights to his reporter at Bhubaneswar by the Police can be read as not without motive.

The civil society must rise to the occasion and stand with MUFP in protection of Freedom of Press.