Determination of Orissa’s main mainstream daily ‘The Sambad’ to strengthen Oriya literature has finally entered into family festivities, which would revolutionize the literature campaign, said the Chief Guest, Journalist Subhas Chandra Pattanayak, who is marked for having released all his books on important days of his family festivities, specifically on birthdays of his children and grand children so far. 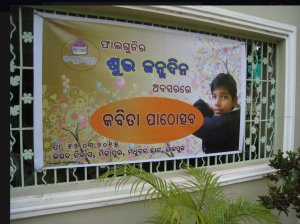 Eminent educationist Kailash Chandra Nayak, in his house premises at Mirzapur, linked the endeavor of Sambad Sahitya Ghar (SSG) to associate every household with Oriya literature by celebrating his grandson Phalguni’s birthday with a conference of poets under the banner of SSG, Rasulpur chapter, which he heads.

Pattanayak recalled how India had woke up against the arbitrary rule of the British by patriotic songs and poems by her bards of the struggle and called upon poets to now devote their pens to transmit the message of freedom, the fight for which, is to commence anew. He lauded the Sambad chief Soumya Ranjan Patnaik for having launched the SSG, which is the most appropriate campaign for our mother tongue in contemporary Orissa. 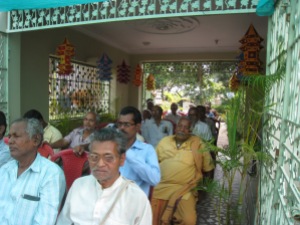 It is remarkable that most of the poems, in the context of India’s future generations symbolized by Phalguni, whose 12th birthday the poets were celebrating, besides being letters of blessing to the boy, were revolutionary poems addressed to dreams for the future.

Young author Achyutananda Patra proposed vote of thanks, when Journalist Devi Prasanna Nayak, father of Phalguni, had introduced the Chief Guest and the Guests of Honor.