RTI activists of Orissa, who have been playing fabulous role in making people conscious about how badly the State is running, were not the only participants in the FAST ONTO DEATH which Sri Gajanan Mishra has been carrying out for the fourth consecutive day demanding use of Oriya as medium of governance in Orissa, but also politicians of eminence belonging to almost all parties except the ruling BJD have expressed their solidarity with the Bhasa Sangram Samiti and pledged their support to the cause to make it so resounding that the State Government would hate itself for the abominable lack of concern it has shown to the mother tongue of the people and to the precious life of Sri Mishra. 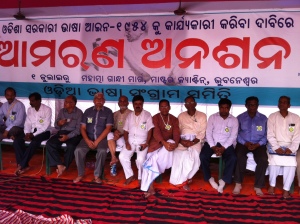 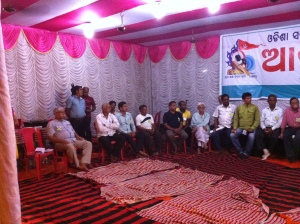 The language lovers in increasing numbers are joining hunger strike everyday in solidarity with Sri Mishra, who, by his will force and on the strength of dedication for the people of Orissa, has maintained his physical stamina so far, despite continuous fasting for four days. Chhabi Mahali, Bharadwaja Mishra, Durga Das, Tuni Swain, Prativa Das, Priti Nayak, Trinath Maharana were in solidarity fast.

Here bellow is the Samiti’s Press release that depicts the day.