It is interesting to note that a ruling party MP Sri Baisnab Charan Parida has been trying to create confusion in the general public in matter of governance of Orissa in Oriya.

Whether or not recognition crisis lies at its root is a different matter, but curiously, a few writers are also collaborating with him, who have no qualms in showing their willingness to act as per a very condemned proverbial Oriya saying – “Ghaita Maru Pachhe Sautuni Randa Heu” (Co-wife be stripped of bracelets even if that requires death of the husband). How funny!

Sri Parida has created a committee styled “Bhasa Suraksha Sammilani” (hereinafter called ‘Sammilani’) with assertions to campaign for implementation of the Orissa Official Language Act, 1954, without knowing why the Act has not been implemented; and he has made this Sammilani condemn the positive steps the State government has taken in response to the movement led by ‘Odia Bhasa Sangam Samiti’ (hereinafter called ‘Samiti’). The Government has already announced to implement the same Act and has added force to this announcement by holding the first meeting of Joint Action Committee (hereinafter called ‘JAC’) comprising five ministers representing the government and seven language activists representing the Bhasa Sangram Samiti, on August 1, 2015. Despite having tried to disturb this meeting, Parida had remained present all through the meeting and had witnessed the unambiguous cooperation of the Government with the Samiti and vice versa to implement, sans any fault, the Official Language Act. It is shocking, therefore, that, the Same Parida has condemned the Government’s positive proceeding with the Samiti to ensure governance of Orissa in Oriya and has misled some men of letters in this matter. In the document placed below, Parida has signed at serial No.6 a participant. 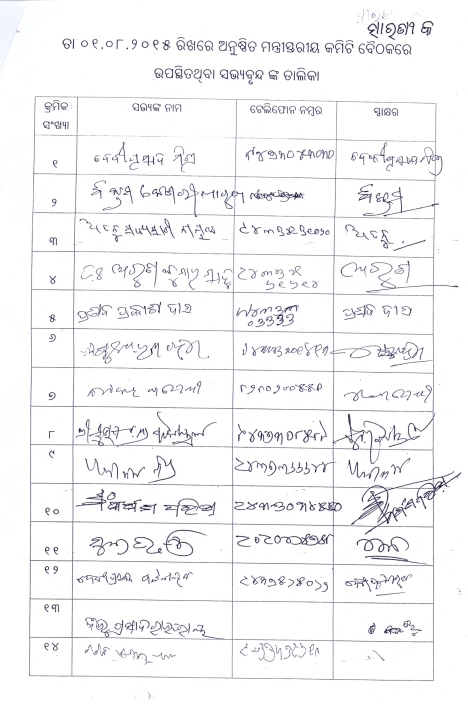 So, it is intriguing that he is opposing the decision already taken to implement the Language Act.

In the said meeting, eminent linguist Dr. Debi Prasanna Pattanayak, who was specially invited thereto, had suggested that steps should be taken to form a ‘Language Policy’ upon which Samiti Convener Sri Sankar Parida had proposed that Dr. Pattanayak should draft the same. The JAC had unanimously agreed.

Accordingly, Dr. Pattanayak has submitted to the JAC Chairman Sri Debi Prasad Mishra the initial part of his draft and has been discussing with Samiti members about details of what should be placed in the Policy finally. He has also joined intermittent meetings of the Samiti with the Chairman of JAC, Hon’ble Minister Sri Mishra. 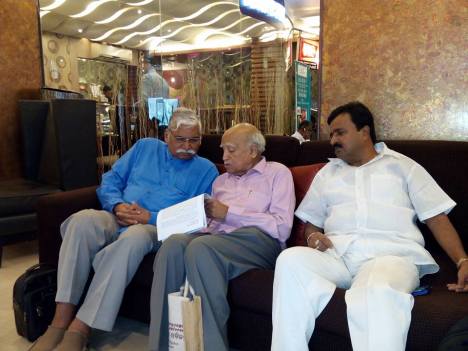 The above picture depicts Dr. Pattanayak discussing with Sri Subhas Chandra Pattanayak his draft when Sri Sankar Parida, Convener of the Samiti is keenly watching and advancing his suggestions. 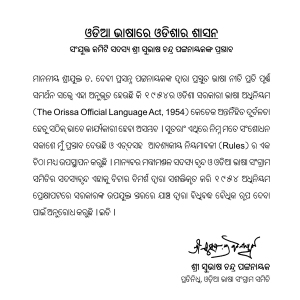 On the other hand, as per Resolution No.3 of the JAC, Sri Subhas Chandra Pattanayak has already submitted a draft of amendment to the Orissa Official Language Act, 1954 as it was found that the Act is inherently defective for which, even the then Chief Minister J.B.Patnaik, despite all his eagerness to ensure administration in Oriya, could not implement it.

There are no Rules to drive the Act and there is no provision in the Act for enabling the Government to frame the Rules. Unless this lacuna is removed, the Act cannot be implemented as desired in Orissa.

Hence Sri Subhas Chandra Pattanayak has formulated the necessary amendment to be made in the Act and has also submitted the same along with a set of the draft Rules to the Chairman of JAC Sri Mishra.

Dr. Subrat Kumar Prusty is translating the same into Oriya to facilitate the process for the Government to expedite the necessary and unavoidable legislation.

Both these documents shall be discussed and fine-tuned in the next meeting of JAC.

In the meantime, Hon’ble Minister Sri Mishra has taken two informal meetings with the Samiti, participated by Dr. Debi Prasanna Pattanayak, Sri Sankara Parida, Dr. Subrat Kumar Prusty, Prof. Natabar Satapathy, Sri Beba Prasad Parija and Sri Subhas Chandra Pattanayak as a positive step towards governance of Orissa in Oriya. He has been apprised by the Samiti members of how to provide the support system for non-Oriya officers and functionaries to deal with their files in Oriya.

When such promising and positive steps are being taken by the Joint Committee of Ministers and Samiti Members, and when the Government has already pronounced to implement the Act in a pattern that shall have no scope to be contravened without attracting penal action; and when, therefore, Dr. Debi Prasanna Pattanayak and Sri Subhas Chandra Pattanayak have formulated and submitted the Language Policy and draft Rules respectively to drive the Act ahead for complete governance of Orissa in Oriya, is there any justification for Parida to hold separate meetings in demand of implementation of the Act?

What else is the motive if not a design to foil all these positive steps?

We have earlier reported that Sri Baishnab Parida had tried to derail the discussion on August 1 by creating a very uncalled for, quarrelsome hubbub, deplorable enough to prompt a member of the ministerial group to ask a staff to close the door of the Secretariat Conference Hall, lest observers waiting outside get a negative message. 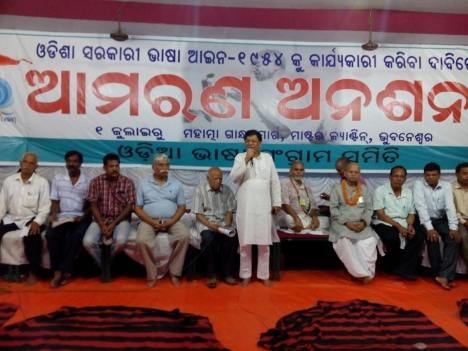 The above picture was taken when Sri Parida was addressing language activists under the canopy of the Samiti under chairmanship of Sri Sankar Parida at the hunger strike spot, fully endorsing the campaign and strongly condemning the Chief Minister for his negligence to implementation of the Language Act.

In this meeting, though he is a BJD member in the Rajyasabha, he had roared that Naveen Patnaik being in power and sure to be in power by polluting the voters with wine and money as always, has no botheration for Oriya language.

No wonder, the same Sri Parida is trying to foil the advance and positive steps the Government is taking for implementation of the Language Act.

Motive? May be recognition crisis, may be envy, may be anything else. Sad, this is happening.