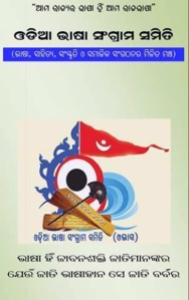 We in Odia Bhasa Sangram Samiti (hereinafter Samiti)  are sure that governance of Orissa in Oriya is no more distant from reality. Our systematic movement is yielding results and the political government is determined to remove all obstacles from the way of governance of Orissa in Oriya. We have held many informal meetings with the Ministerial Committee on the subject and our last meeting in the chamber of Hon’ble Minister Debi Prasad Mishra, who heads the said Committee,  gives me every reason  to report that, Hon’ble Chief Minister Naveen Patnaik is also eager to see that Orissa is governed in Oriya.

We, from our side, have fully honored the resolutions adopted in the Joint Action Committee comprising our representatives and the Ministers representing the Chief Minister held on August 01, 2015 in the 2nd floor Conference Hall of the Secretariat. Dr. Debi Prasanna Pattanayak was specifically requested to draft the “Language Policy” which he has done and submitted. Under resolution No.3, Subhas Chandra Pattanayak has submitted draft of necessary amendment to the Orissa Official Language Act, 1954 along with the draft of necessary Rules for driving the Act ahead. The State Government on its part has taken all steps for creation of a website on the subject wherein the above three drafts would be posted for the general public to suggest improvements, if any, they deem relevant to the purpose.The website will carry the original Act and all the official circulars in the matter so far for facilitating  formation of  public opinion and suggestions.

The Hon’ble CM will launch this historic site possibly by the 2nd week of November.

Sri Sankar Parida, Convener of the Samiti and Dr. Subrat Kumar Prusty, in consultation with Dr. Debi Prasanna Pattanayak and Prof. Natabar Satapathy and other representatives thereof , have created a road-map for proper implementation of the Act.

Another informal meeting of the Joint Action Committee is on the anvil to finalize the agenda to be placed before the next formal meeting wherein the relevant official functionaries along with eminent men of letters with marked language activism would be invited to put forth their views. With such views as would be coming, the concrete proposals shall be fine-tuned and then the Government shall proceed to get the necessary legislation, so that penal action should be taken against whosoever contravenes the Act.

It is most noteworthy that the CM is taking personal interest to ensure that the assurance given to the Bhasa Sangram Samiti on July 08, 2015 is honored in letter and spirit. And, the way the Ministers representing the CM are giving their unrestrained constructive cooperation to us in this matter has, in fact, created the necessary climate for governance of Orissa in Oriya.

When thus we feel that the mission of the movement is not far from success, we congratulate in advance all the friends whose language activism is going to succeed. We congratulate poet Gajanan Mishra whose ‘Fast onto Death’ jerked the entire Oriya population including all the Ministers and the CM out of slumber, consequent upon which the dreams of the revered founders of our language-based State is coming true within a few months. Students from Shantiniketan had come on cycle to help that dream come true. Students from Sambalpur are coming on foot to help that dream come true. We congratulate them all in advance. Media in general and Sambad Editor Soumya Ranjan Patnaik in particular deserve congratulations in advance as their cooperation to our campaign is a great factor in bringing the government to agreement with the Samiti for governance of Orissa in Oriya. Here are some pictures that would carry their contributions into the pages of history.