When on July 8, 2015, Chief Minister Naveen Patnaik agreed to our demand for governance of Orissa in Oriya and constituted a ministerial committee with 5 of his cabinet colleagues and 7 representatives of Oriya Bhasa Sangram Samiti including this reporter, not only poet Gajanan Mishra who was on fast from July 1, 2015 in support of this demand and language activists also in token fast in solidarity with him, but also the whole of Orissa had expressed trust on the new step. My research helped me locate that despite Orissa Official Language Act in force since October 14, 1954, Orissa continues to perish under non-Oriya administration, simply because, ministers and mandarins with anglicized mentality are constantly contravening the said Act, as the Act has no provision of punishment against contravention thereof. Hence, as a member of the Committee I legitimately submitted a draft amendment to the Act along with of draft of Rules proposing therein necessary punishment to whosoever contravenes the Official Language Act. The same was posted by the government in the official website made for the purpose. So, people’s trust including ours in the Committee on the government increased in matter of governance of Orissa in Oriya. But the Chief Minister has breached this trust.

Severely affected by this breach of trust, we decided to seek the enactment of punishment for contravention of the Act in a new pattern. As OBSS has expanded into various other demands, even though they are no less important, the crux of the issue well defined in Gajanan Mishra’s fast – implementation of the 1954 Act – lost its primacy in the labyrinth of multiplicity of demands.

So, without any prejudice to our stand taken in the Ministerial Committee, I thought that, it would be better if a separate movement is addressed to the one and the only one purpose: punishment to whosoever contravenes Orissa Official Language Act. I am sure, if this provision is enacted and enforced, there shall be no hindrance to governance of Orissa in Oriya, as the non-Oriya practitioners in administration shall be forced to learn Oriya and practice Oriya in official work.

I made an appeal to this effect in ORISSA MATTERS on the occasion of Utkal Divas, 2016.

Poet Gajanan Mishra, who was the first friend to have supported my new movement on the very day I proposed it in Face Book,  added his unreserved approval with a visit to my residence along with poet Umakanta Raut.

My associate Pabitra Maharatha in the Samaja employees’ movement readily pledged his support to my proposal. Then a journalist, Sagar Satpathy offered his support. Columnists Tusarkanta Satpathy, whose exemplary activism had added immensely to the strength of Gajana babu’s July fast, expressed his solidarity. Editor of Subartta, Pradyumna Satpathy, one of my admirers known for his oratory skill was taken into this combination and my residence being a government quarter, his office was chosen as the office of the movement.

The above named friends formally approved the new forum  “Bhasa Andolan, Orissa” in an extended meeting of language activists in a meeting held in his office where it was decided to support my method of silent black-flag march for mass awakening for the cause we were to espouse. It post-facto approved the Ultimatum I had submitted to the Chief Secretary with Maharatha accompanying me on the same day.  The Government, through this Ultimatum approved by others over phone, was told that, if the provision of punishment against whosoever contravenes the Orissa Official Language Act, as advanced by Subhas Chandra Pattanayak in the ministerial committee, is not legislated, we will take the matter to the people by way of silent march of protest with black-flags against the official mischief. And we have been doing this, as per our agenda, with effect from Pana Sankranti – (13.4.2016) – Orissa’s New Year’s Day.

Netizens of Orissa are keeping a close watch on how our silent black-flag march is proceeding every day. The Government has also taken serious note of it; otherwise, yesterday, it should not have engaged the Police to stop our march after we crossed the Assembly, in order to allow a normal pass to the Chief Minister around half an hour before his car was to negotiate the road we march on. I had used this technique for the first time to wake up the people of Athgarh against their representative, the then Chief Minister J.B.Patnaik when it was clear that he was drifting away from the only relevant promise he had made at the time of filing nomination papers. It had clicked very successfully and thereafter, instead of posing as a ruler, he had kept it always in mind that he was representative of the people of Athgarh.

Pradyumna Satpathy, Tusar Satpathy and all dear language activists who have joined this unique movement have shown  how powerful could be the voice of silence when used in a revolution.

Let the government understand the force of our silence. We are in the best of the cause of Orissa and we will never halt before our demand for punishment to whosoever contravenes the founding Law of Orissa – The Orissa Official Language Act, 1954, is codified.

Here below, for records only, I will put some relevant pictures, though all of these are massively shared in social media, particularly in Facebook.

Let me begin with the picture of our Ultimatum to Government through the State’s Chief Secretary. 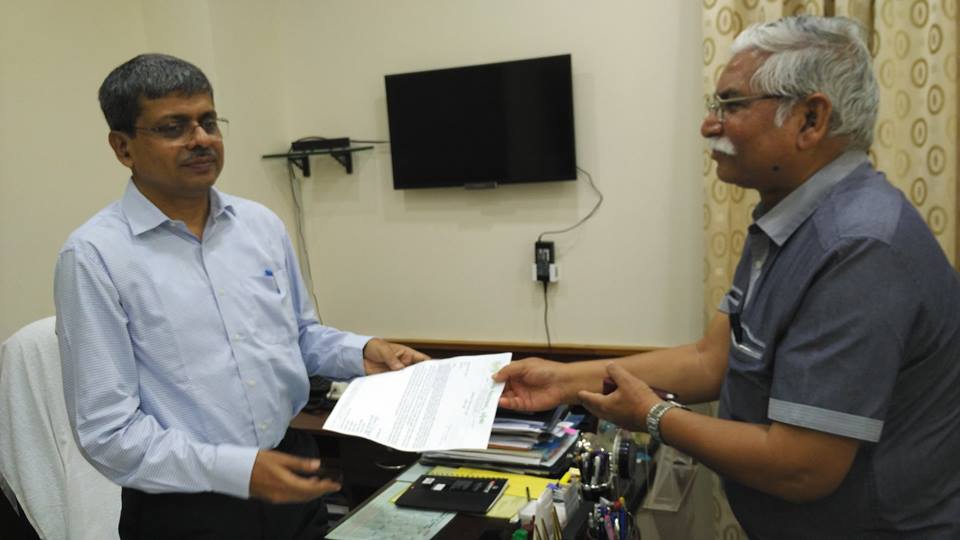 Below is poet Gajanan Mishra whose august Fast had given birth to the Ministerial Committee mentioned supra. He and the well known bard of our movement Poet Umakant Raut discussed and approved our plan wholeheartedly in my study. 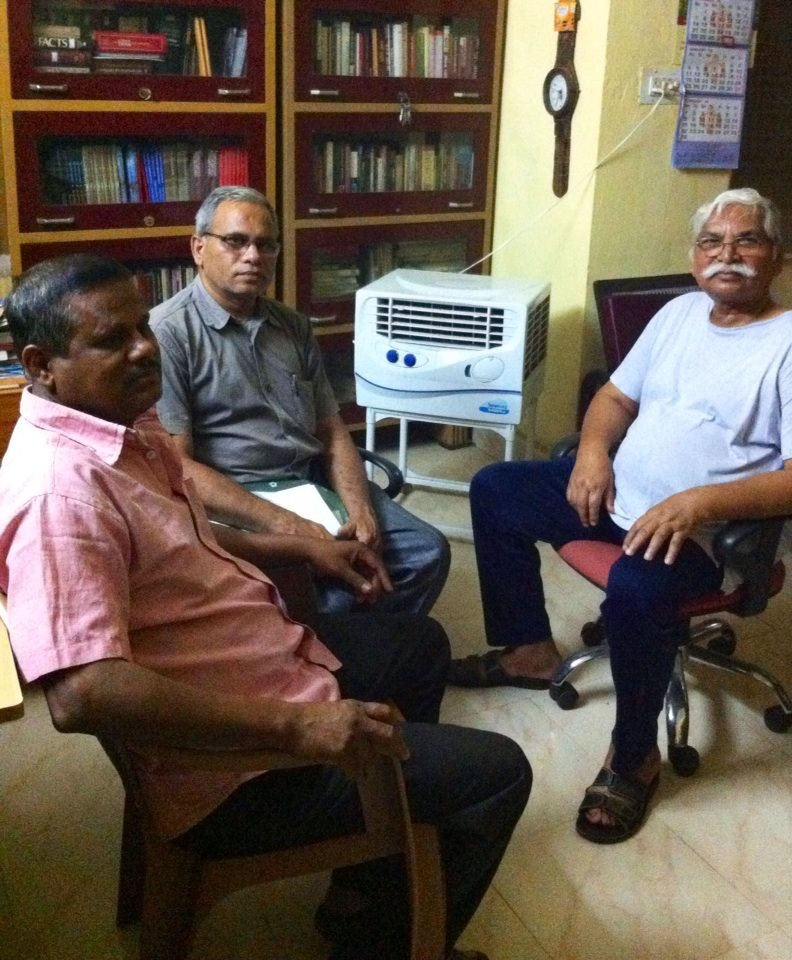 The picture below is of our extended meeting in the Office of Subartta. 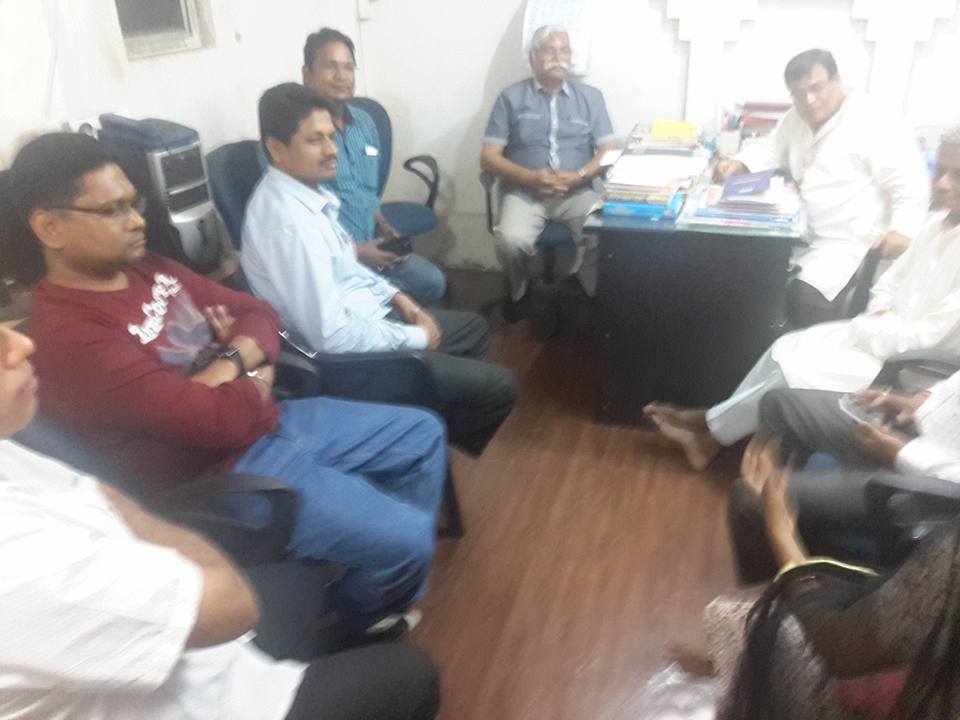 In this historic meeting, it was decided that, on the first day, myself as Founder and Chairman of Bhasa Andolan (Language Movement), Pabitra Mohan Maharatha as convener of the movement, Pradyumna Satpathy as the Commander of the Movement, and Tusarkant Satpathy as coordinator of the Movement shall hit the road. But, lexicologist Prof. Dr. Natabar Satpathy – another member of the Ministerial Committee – wanted to take up the black-flag on the first day. Therefore, it was decided on the spot that instead of Pabitra Mohan Maharatha Prof. Satpathy shall join the march. These are pictures of the first day. 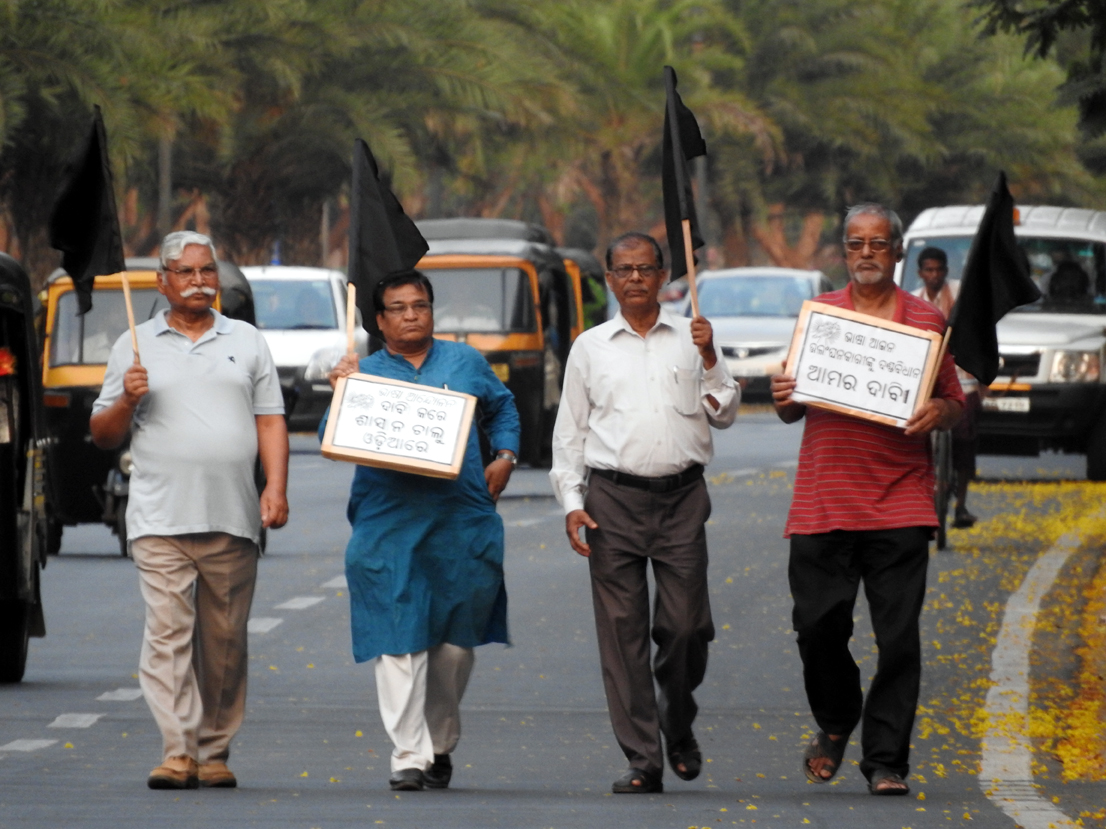 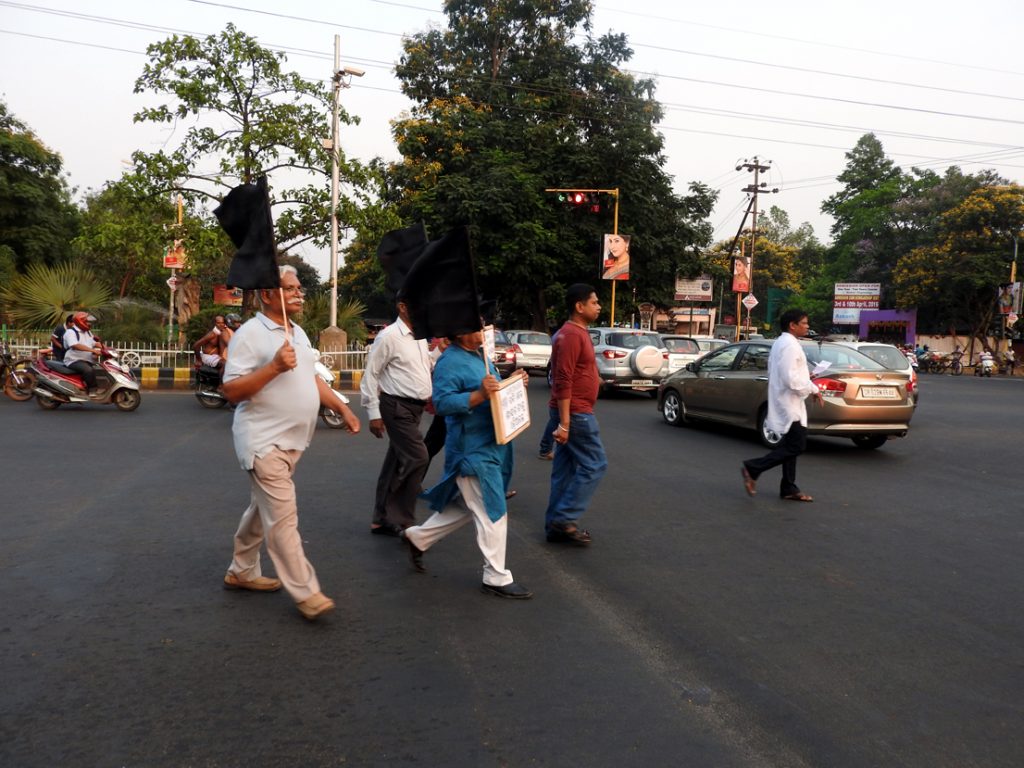 On the second day, Convener of the movement Pabitra Mohan Maharatha, Journalist Sagar Satpathy, Wing Commander (Rtd) Nandakishore Samal and London based physician Dr. Nityanand Patnaik took up the rally. Below are the pictorial records thereof. 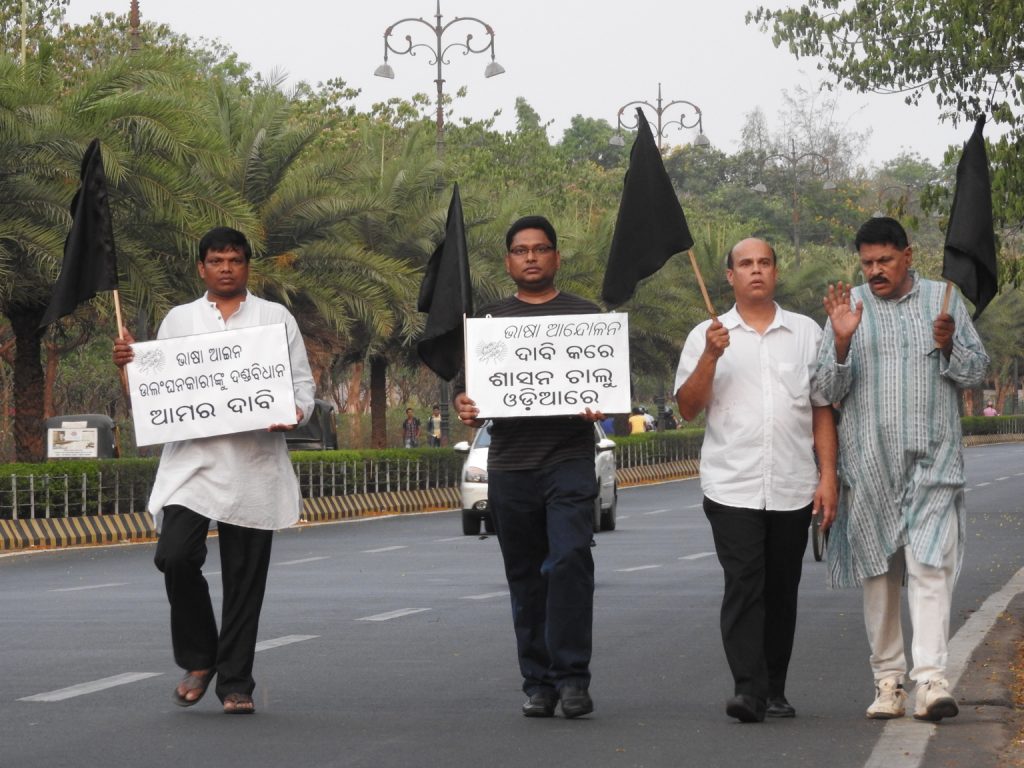 Even as the government posed nonchalant, the third day launched Prof. (Rtd) Aswini Kumar Swain, Dr. Kulamani Samal, Kali Prasad Samantray and Kahnu Charan Behura on the road with the black-flags and posters. 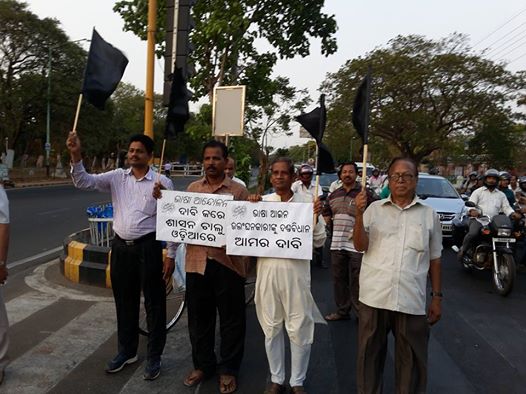 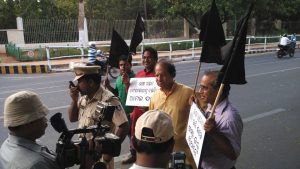 Illustrious singer, known for his progressive world outlook, Padmashree Prafulla Kar joined the fourth day rally. As noted supra, government was so worried that the police had to stop the march halfway to allow the CM a free passage. With Sri Kar, were Subrat Kumar Chhatoi, Malaya Kumar Tripathy and Rakesh Jena in the protest march. Journalist Vivekanand Das later took over from Sri Kar, as Commander Pradyumna Satpathy decided that the revered senior should take rest. Below are a few pictures. 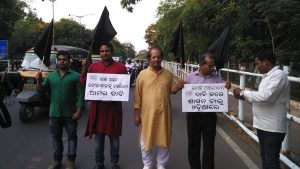 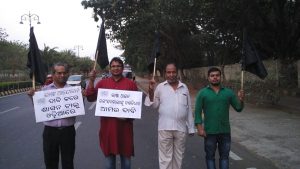 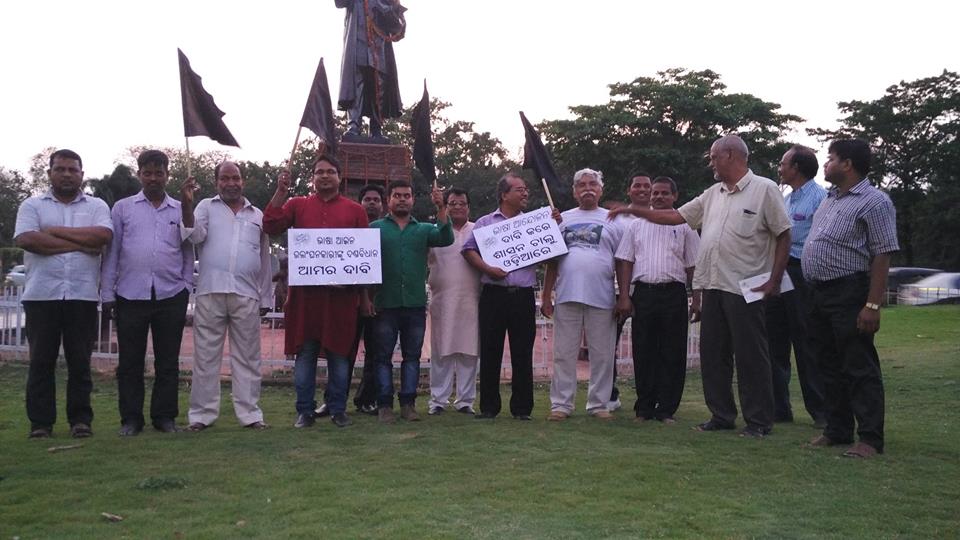