If the Chief Minister is sincere in his approach, one may call it the first positive step towards governance of Orissa in Oriya; as on being invited by the Chief Minister, Bhasha Andolan leadership comprising Subhas Chandra Pattanayak (Chairman), Pradyumna Satapathy (President) and Pabitra Maharatha (Convener), met him in an exclusive discussion in his Secretariat chamber at 6.30 pm on Friday. 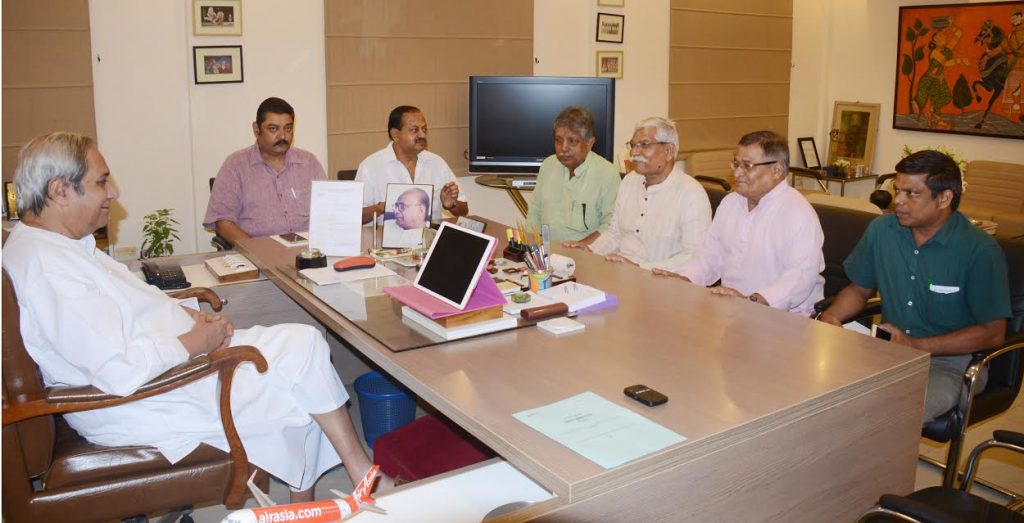 Former Minister Debi Prasad Mishra, who, as Chairman of the Ministerial Committee, had the greatest role in making the Government accept the first part of the advice, which Sri Pattanayak had given as a member of that Committee and in, consequent upon that, in inserting section 5 in the Orissa Official Language Act, 1954, paving thereby the way for formation of Rules to drive the Act ahead under the new section, facilitated the discussion. Minister Prafulla Samal and Spokesman of the ruling party, MP (Rajyasabha) Pratap Dev were present.

As the CM wanted to hear from Sri Pattanayak the Bhasha Andolan Chairman apprised him of how it is the responsibility of the Government to save its own law from being contravened by its functionaries and how the Orissa Official Language Act is being contravened in absence of punitive measures in the Act. He further showed that the new section 4 inserted through Ordinance on May 21, 2016 made a law in due course in the Assembly,was a fraud played upon the people of Orissa inasmuch was that was created outside the Setion 4 proposed by him and vetted by the Law Department. There was deliberate re-numbering of the section 4 as section 5, when the Law department had pencil vetted and approved the Section 4 submitted in official draft as the only proposed section. So, renaming of that section as section 5 and inserting new provisions in the name of Section 4 was blatantly unauthorized and fraudulent, meant only to defeat the very purpose of the Orissa Official Language Act, Sri Pattanayak had told the CM. Therefore the said section 4 should be replaced with unambiguous penal provision as per his proposal in the Ministerial Committee equipped with power given to every member of the Oriya race to prosecute whosoever contravenes the Act and Notifications issued there-under, sans any setback to the scope and spirit of the original Act, Sri Pattanayak told the CM.

According to Bhasha Andolan, the Orissa Official Language Rules, 2016, created on basis of the new Section-4 is of no consequence inasmuch as working of the Act is left therein to the mercy of the mandarins that habitually contravene the Act. In a written memorandum, given on the table to the CM, its leadership emphasized that, it “insists upon adoption of all the proposals made in the draft Rules as submitted by Subhas Chandra Pattanayak in the Ministerial Committee and published in the specific official website”.

Bhasha Andolan shall continue with its Black Flag Campaign till punitive provisions are made in the OOL Act and its Rules, the leadership decided.