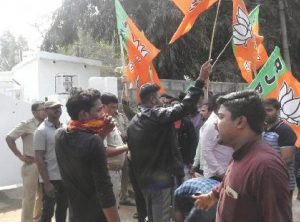 Orissa’s present official predicament can be termed ‘V.K.Pandian’. He is private Secretary to Chief Minister Naveen Patnaik. His residence was ransacked by group of persons holding BJP flags on the 10th of February allegedly in protest against his politically pregnant activities that jeopardize public interest.

The collective bargaining body of IAS officers and organizations of other government servants on whom the IAS officers have their exerting influence, have met the Chief Minister and demanded stern action against fellows that embarrassed Pandian. The CM has promised to comply with their demand. Seven persons are already put behind the bars.

The unprecedented solidarity shown to Pandian by his class , displayed simultaneously with the ruling party rally in his support, forces one to wonder as to what extent the persons in administrative services can browbeat Orissa.

Theory of Thrashing the Officials

Father of the CM – Biju Patnaik – who was people’s Hobson’s choice, had, as the Chief Minister, come to the conclusion that , unless the malfunctioning functionaries are beaten violently by the people, administration would not run on its desired track; and, therefore, had given a clarion call for beating the bureaucrats as and when and where the people feel the remedy to misrule lies in this shock-treatment. Naveen Patnaik has glorified this ‘Theory of Thrashing the Officials’ (Mada-Tattva) by glorifying his father.

If Biju Patnaik is not posthumously condemned for this political hooliganism, why should someone be prosecuted against for practicing his glorified ‘theory’ on Pandian, whom his attackers hold as the personification of misrule to which the CM’s floor in the Secretariat has subjected Orissa? 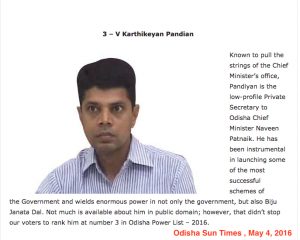 Why the Chief Minister was silent when a media survey identified him as the third most powerful man in Orissa, more powerful than all the Ministers and Secretaries including the Chief Secretary? Naveen babu celebrated his first position in this list prepared by the survey and therefore, also his Private Secretary’s position.

Orissa Chief Minister is yet to learn that democracy suffers when a PS of a CM surpasses every Minister and Secretary in power in a State.

If he has an iota of respect for democracy, he should, as Chief Minister, tell the people how and why his private secretary is more powerful than his ministerial colleagues and all other Secretaries including the Chief Secretary.

Sans any travesty of truth, I may repeat that in presenting the survey report, the concerned media had observed that Pandian “wields enormous power in not only the government, but also Biju Janata Dal“.

Only two instances of how normal administration is jeopardized by Pandian in gross violation of official conduct may be perused.

(1) Minister had to carry out his order

When Bijayashree Rautray was the Labor Minister, he had to carry out oral orders of Chief Minister’s V. K. Pandian to transfer P.K.Mohanty, District Labor Officer of Cuttack within a very short time of his posting, because he had justly initiated action against the unfair labor practices and prosecutable contravention of labor laws by the publisher of The Samaja, the newspaper that had pledged pages to political propaganda of the CM. Sri Rautray had personally told me of how he was forced by Pandian. I had published the matter under the caption “Transfer Industry: Orissa’s only industry that ensures income without investment”. If he had failed to take note of this at that time, let him now, when he has promised to protect Pandian, ask Sri Rautray to refute what I have said in that write-up.

(2) Mischief played even with the CM

As a member of the Ministerial Committee on working of Orissa Official Language Act, 1954, I had submitted a set of two legislations in September 2015: (a) Amendment of the Act to provide for formation of Rules to implement the Act, by “addition of new section” – Section -4. Sub-Section (2) thereof read, “The State Government may make Rules for carrying out all or any of the purpose of this Act or for due enforcement of any or all provisions of this Act or for enlarging the scope or purpose of this Act or for providing punishment for the violation of any provision of this Act.” and (b) Orissa Official Language Rules that carried details of punishment for violation of the Act and creation of ‘Bhasha Adalat’ for adjudication and administration of the proposed punishment. Both the drafts were placed in the Official website specifically created for the purpose.

The Chief Minister had assured the Assembly on 14.12.2015 that amendment of the Act was on the anvil. But surprisingly he drifted away and tried to render the Ministerial Committee inconsequential.

In protest thereto and in support of my proposed legislation, Bhasha Andolan was established and under due notice to the Government through the Chief Secretary, the world’s most unique BlackFlag Campaign commenced on 13.04.2016.

As the campaign reached 39 days with who’s who of eminent Oriyas taking the BlackFlag to their hand, situation for the CM was so very alarming that, the amendment was brought in through an Ordinance on 21.05.2016 by “addition” of a new section that read, “The State Government may make Rules to carry out the purposes of the Act.”

Mandarins played a mischief with the people of Orissa by making the law a mere instrument to “review and monitor” if a “Notification issued under sub-section (2) of section (2) has been been effectively implemented.” But as the CM at the sometime also announced that the Rules would be framed by 15.08.2016 to implement the Act, in a hope against hope that the deficiency in the amendment would be done away with in the Rules, Bhasha Andolan had postponed the BlackFlag campaign till 16. 08.2016. Orissa was cheated. The BlackFlag campaign resumed on 16.08.2016.

On 19.05.2017 the Chief Minister invited me to a discussion in his official chamber to find out a solution to our campaign. I insisted that I must take two of my colleagues for the discussion and finally the CM agreed. I took Pradyumn Satpathy and Pabitra Maharatha with me.

Showing how Section 4 inserted by 2016 amendment in the Act is “inherently deficient to remove the obstacle from the way of governance of Orissa in Oriya”, I had suggested that the same be replaced with the following words:

“ The State Government may, in such manner and by such authority, as may be prescribed in the Rules made under this Act, receive complaints from general public of Orissa in matter of contravention of the Act , and over and above such complaints, suo motto review and monitor whether the directions contained in Notification under sub-section (2) of section 2 are contrived and subject the contravener to punishment stipulated in the Rules.”

In the memorandum that contained this suggestion, I had further written, “Bhasha Andolan insists upon adoption of all the proposals made in the draft Rules submitted by Subhas Chandra Pattanayak in the Ministerial Committee and published in the specific official website the copy of which is enclosed for ready reference.” 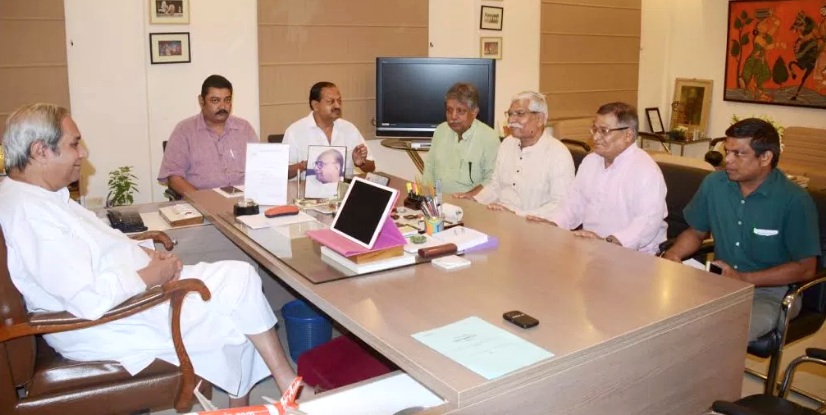 In presence of former Minister Debi Prasad Mishra, who was heading the ‘Ministerial Committee’ clandestinely killed by CMO, incumbent Minister Prafulla Samal and MP (Rajya Sabha) Pratap Keshari Dev, the Chief Minister handed over the memorandum to V.K.Pandian who was standing by his side. The next day i.e.on 20.05.2017, I was informed by Sri Debi Prasad Mishra that the CM had instructed Pandian to see that our suggestion is vetted as soon as possible by the Law Secretary.

But it never reached the Law Secretary. And the mischief, inserted in unauthorized manner,continues. I say it ‘unauthorized’, because, the Section 4 that I had proposed, was approved by the Law department with pencil-vetting. After the Law department’s approval with pencil-vetting reached the G.A. Department, the mandarins had changed the number of the approved section from 4 to 5 and had inserted the following words giving it the name “Section 4”:

“The State Government may, within such period, in such manner and by such authority, as may be prescribed in the rules made under this Act,review and monitor whether the direction contained in the notification issued under sub-section (2) of section 2 has been effectively implemented.”

This was absolutely unauthorized by the Law department and therefore a fraud was played upon the vetted draft.

Therefore, I had demanded that, this fraudulently inserted Section 4 be replaced with the words placed in my memorandum handed over to him on his table.

Then why the same was never sent to the Law Department and how is it that the same is also not “traceable” in the office of the CM?

We would like to know, what the Chief Minister has to say on this.

If what Sri Debi Prasad Mishra had told me as noted supra was correct, it is sure that Pandian has suppressed the same in order not to allow governance of Orissa in Oriya. We want to know how do the IAS officers and their class appendages react to this exposure. Do they support such activities of Pandian?

The present situation has become so putrified by the class of IAS , OAS officers, who, instead of considering themselves as salaried persons in ‘service’, are dazzling as ‘administrators’, that, it is incumbent upon the State Governor to intervene immediately and stop the Chief Minister, a puppet in the hands of bureaucracy, who reads out review reports prepared by bureaucracy or his PS, without making any review, from taking any action against anybody in Pandian’s case, as he is not supposed to act independently.

The Governor must query if Pandian’s assignment is coterminous with the tenure of Naveen Patnaik as Chief Minister. If not, (and certainly not under the Rules of Business and any prevalent Law) he should immediately order for his transfer from his present position to any other post and any other officer be put to replace him.