By gaining over a couple of gullible fellows that were in key role in the Bhasha Andolan, the Government of Orissa was sure of killing the unique ‘Black Flag Campaign’, which has forced the Chief Minister to amend the Orissa Official Language Act twice so far.

The first amendment in 2016 was a part fulfillment of the demand of Subhas Chandra Pattanayak, founder of Bhasha Andolan, as member of the Ministerial Committee on Sept.3, 2015.

The second amendment, passed by the Assembly on May 1, 2018 is in fulfillment of his second demand. But it is so notoriously worded that the amendment acts against the Act proper and, if not repelled, will defeat the very purpose of the Act. Therefore, Sri Pattanayak had urged upon the Governor to return the Bill without assent and , as the Governor succumbed to official tricks, he wrote again to the Chief Minister to bring in a fresh amendment to repel the May 1 amendment and to make the Act flawless with the provisions he had suggested when he had invited him to discuss the issue.

To the Chief Minister as well as to the mandarins of anglicized mentality, it was an anathema. But there was no way to ban the movement or to escape its impact.

Decades ago, in early 1980s, Sri Pattanayak had devised this method of “Silent Black Flag March” to wake up the people against misrule without resorting to any violent manner and acting absolutely within the limits of the Law. He had succeeded in his campaign against the then Chief Minister J.B.Patnaik in his constituency of Athgarh. So this method is a proven method of acting against the ruler without breach of any Rule or Law.

When the campaign for implementation of an existing Law without breach of any law of the land cannot be held illegal, Subhas Chandra Pattanayak, founder of the movement, was too strong for the Government to be subdued. They, therefore, zoomed in on Maharatha and Pradyumna Satapathy. They were picked up and used as contract killers against the campaign.

July 16 was the date fixed for resumption of the third phase of the Black Flag Campaign. In fact the campaign had resumed that day, Sri Pattanayak cerimonially handing over the flags to the bearers. The campaign of the day was completed at the altar of Kula Gourb Madhusudan Das as usual. But, in the evening, the above two persons informed the Press behind back of Sri Pattanayak that the Bhasha Andolan has unanimously decided to postpone the Black Flag Campaign till the next session of the Assembly, as the Finance Minister had told them to bring in the desired amendment in that session.

Whole of Orissa rejected this false and fraudulent assertion and despite initial debacle, as the two fellows did not cooperate, the campaign continued non-stop.

The contract killers failed. The campaign continued with more vigor, making the Govt. realize that its shrewd strategy cannot succeed against the dedicated children of the soil.

A group of eight social activists from Kendrapada and Cuttack led by Ranjan Kumar Das and Jitendra Kumar Sahu hit the Capital on 17th last month covering 87 kms on foot with the celebrated black flags from the birthplace of Kula Gourab Madhusudan Das. This was a slap on the face of the government that had used the above two contract killers to kill the movement. In order to escape, the government announced on 21st August that it was decided to enforce writing in Oriya on the signboards within 15 days.The order is more conspicuous by its breach than noninfringement.

Another group of determined language activists of Khurda District led by Kamal Lochan Nayak and Bibhudendra Bidyadhar dared heavy showers on 5th this month to kick on the citadel of power at Bhubaneswar by the distance from the district headquarters by foot, with the celebrated Black Flags in hand. Assembly in session, the government felt the shock.

As the two contract killers failed to kill the campaign, three young women activists dedicated to the cause of the mother tongue rushed to Bhubaneswar from Cuttack a day later, i.e. on the 7th instant. 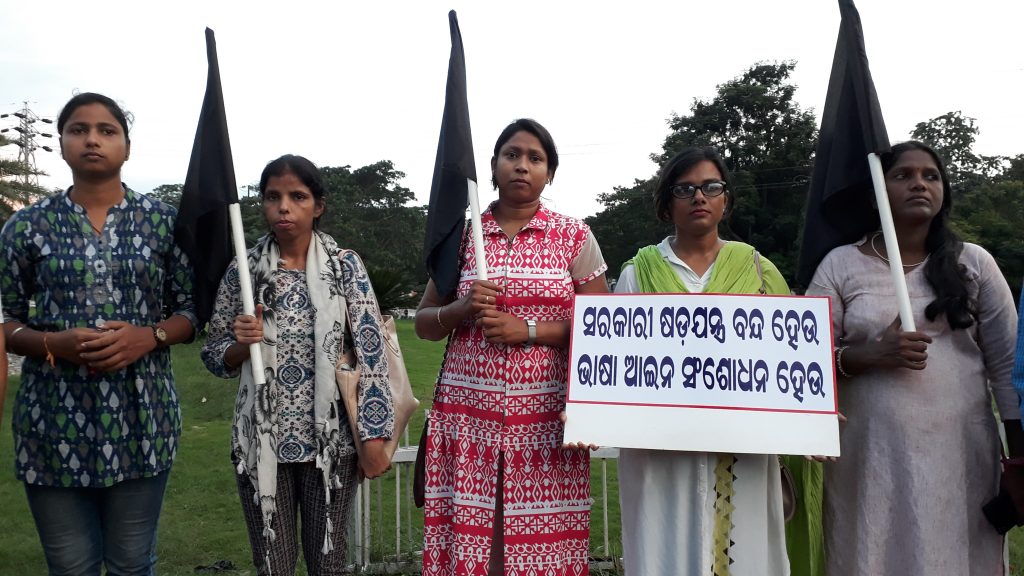 This multiplied the Khurdha effect, consequent upon which, as the contract killers could not succeed in killing the Black Flag Campaign, in an impromptu meeting of the Cabinet a decision has been adopted to amend the Official Language Act. The Assembly is yet to be given the proposed Bill.

As is the wont of the mandarins, if the cabinet’s approved amendment is not addressed to perfect working of the Act created by the first elected Assembly of Orissa under the stewardship of the first and the most revered Chief Minister Nabakrushna Choudhury, there is possibility of rejection of the same by Bhasha Andolan.