Media organisations, massively benefited by official advertisements and their handpicked political analysts are doing a wrong to contemporary history of Orissa by attributing Chief Minister Naveen Patnaik’s victory in Election-2019 to his popularity. In reality, votes were fetched by Sri Patnaik by tactful use only of two words, which the ongoing Bhasha Andolan has made most influential in Orissa: (1) KALIA and (2) ORIYA.

The Black Flag (Kalia Pataka) campaign styled Bhasha Andolan for governance of Orissa in Oriya language has woken up the sleeping people of the State. Sri Patnaik used all the tricks and mischief within his command to suppress or break the movement, but failed.

Orissa and the entire civilized world was embarrassed to the core when his security staff were not allowing his visitors,even during his tours, to seek his audience with black color attires. Even ladies were getting stripped of their black stoles!

But, marking the mass appeal of the Kalia Pataka, Sri Patnaik launched a scheme styled Krushak Assistance for Livelihood and Income Augmentation to manipulate its short synonym as KALIA. Everybody knows, how this name KALIA helped his electioneering.

Howsoever effective his electioneering under the cover of KALIA might have been, he was highly apprehensive of people’s rejection, because of the all pervasive public impression that he was averse to Oriya Language. To meet the situation, he jumped into the fray with only Oriya language in his lips. 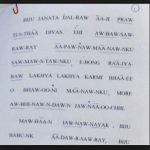 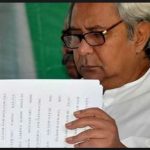 Had he ever have loved Oriya Language and tried to learn it, he could have conversed with the people in their mother tongue. But, instead of learning Oriya, he uses English alphabets to read out words in Oriya!

Convinced that he cannot win unless he changes the impression that he is averse to Oriya Language, he covered every nook and corner of Orissa uttering almost the same sentences in Oriya taken to memory from drafts made in English alphabets.

All the beneficiaries of his hoodwinking tactics that have got elected, know that they might never have got the votes had he not addressed the people in Oriya. A few samples of his memorized Oriya speech, retrieved from web are put below for instant reference.

Let us look at Daringibadi:

This is at Komana, Nuapada:

This is at Aska

This is at Purunakatak, Boudha:

No wonder, the Assembly and the people of Orissa have been forced to get addressed by the Governor in English on the first day of the newly elected 16th Assembly.