News Syndicate
Reward worth possibly more than a crore of Rupees is put in the pipeline for benefit of Pradyumn Satapathy for his treachery against the Bhasha Andolan.

When Subhas Chandra Pattanayak, Founder of the Black Flag Campaign christened Bhasha Andolan, took in Satpathy as a colleague in the novel movement for governance of Orissa in Oriya Language, and made him the President of the informal body, he had no idea that a time may come when this his strong admirer and follower would sabotage the movement for money in form of family income.

Subhas Chandra Pattanayak, then a member of the Ministerial Committee on implementation of the Orissa Official language Act, had not only given the Government his advice for amendment of the Act and for equipping the same with Rules to enforce itself, but also had given the drafts for both the legislation, on September 03, 2015. His proposed Rules at Rule 10 had provided for cash punishment for violation of the Act. It read,

And, at Rule 11(ii), it had given power to any member of the public to initiate prosecution against whosoever makes violation of the Act. 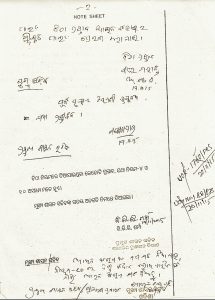 A non-Oriya Officer, then the Principal Secretary of General Administration Department G.V.V.Sharma, who was assigned to the Ministerial Committee, opposed the Rule 10 proposed by Sri Pattanayak and then the anti-Oriya gang including the chief minister ensured that the Ministerial Committee gets derailed. Sri Pattanayak founded Bhasha Andolan to espouse his own demand, with one Pabitra Maharatha, associated with him in “save the Samaja Forum” as convener. Pradyumn Satapathy, by then a great admirer of Sri Pattanayak, was roped in by Pabitra Maharatha.

Pattanayak made him the President of the three member informal team with himself as Chairman.

The campaign commenced on April 13, 2016 and on May 21, 2016 the Government amended the Act by accepting Sri Pattanayak’s suggestion to insert a new section (Section 4) to enable the Government to make the Rules, after necessary vetting by the Law Department.

Sri Pattanayak’s draft was in the following words:

After vetting,the Law Department shaped it as reproduced bellow:

“4. The State Government may make rules for the purpose of giving effect to the provisions of the Odisha Official Language Act,1954.”

After this final vetting by the Law department, the anti-Oriya gang in Government pounced on it and changing its number to 5 from 4, it inserted a new section 4 in the Ordinance promulgated the next day that read,

“4.The State Government may, within such period, in such manner and by such authority, as may be prescribed in the rules made under this Act, review and monitor whether the direction contained in the notification issued under sub-section (2) of section 2 has been effectively implemented.”

This section 4 was inserted by tampering the approval given by the Law department and was ultra vires.

When the Odisha Official Language Rules, 2016 was promulgated on August 12, 2016 creating a committee of 6 Secretaries – the habitual offenders of the Act – to review and monitor whether or not any direction given under any notification under the Act was honored, the mischief behind creation of this ultra vires section was bare.

But the very creation of Rules, 2016 was also legally untenable. It was created under Section 4 of the Odisha Official Language Act,1954, whereas this Section had no provision for creation of Rules. It is Subhas Chandra Pattanayak who alone had submitted the draft legislation for amendment of the Act wherein he had proposed a new section to be known as Section 4 to enable the government to frame rules and the same was approved by the law department. But the idiots in General Administration Department had arbitrarily renumbered that Section 4 to Section 5 in the Ordinance and thus, Section 5 is the Section under which the Rules could have been created. The idiots could not differentiate between the approved Section 4 and the illegally manufactured Section 4 and thus the Rules, 2016, made under the illegally manufactured Section 4 was absolutely ultra vires.

When in rejection of this ultra vires Rules the Black-Flag-Campaign continued, further conspiracy to kill the Act itself brewed in the Secretariat where non-Oriyas and anti-Oriyas rule the roost. Odisha Official Language (Amendment) Act, 2018 was created under this conspiracy. And, in doing this, the Chief Minister conducted a cabinet scam, which Sri Pattanayak thoroughly exposed. Government was determined to destroy the very purpose of the Odisha Official Language Act and Sri Pattanayak was too alert to be hoodwinked. The Government was clearly in a quagmire.

Instead of bowing to the demand for invigorating the Act to impart punishment to whosoever contravenes it, the Government tried to gain over Satpathy and Maharatha, so that Sri Pattanayak could be bereft of support and the movement would breath its last in absence of supporters. Maharatha has misappropriated several lakhs of Rupees earned through souvenir of the movement, because it is he who was in charge of it as the convener. Sri Pattanayak had asked him for details of the income and expenditure, which he refusing, the police was informed about with request to act as deemed proper, the offence being a criminal breech of trust and embezzlement. Police was dissuaded by the Government to act against him. Grapevines emit grotesque suggestions of big bribe given to them to close the movement and Maharatha’s various postings in the social media are such that one may get inclined to believe in the grapevines innuendos.However, shenanigans marked with the manners of Pradyumna Satpathy are mind-blowing. He is fabulously rewarded for his treachery against the Bhasha Andolan, if Sri Pattanayak’s letter to the Governor of Orissa with copy thereof to the Chief Minister, the Chief Secretary and others is not countered by the Government. Sri Pattanayak has written to the Governor how administration has been misused to pave the way for reinstatement of Smt. Sarangi in order only to reward her husband for sabotaging the Bhasha Andolan and has requested him to intervene and ensure that the State Treasury is not ripped off in showing favor to someone who allows himself to act for the administration to ruin a social movement. The letter deserves to be published separately.