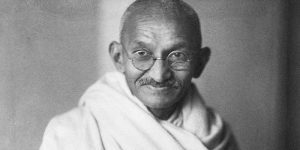 Dearest Bapu, on the occasion of your seventieth birthday in 1939, Albert Einstein had told the world about you in the following words:

“A leader of his people, unsupported by any outward authority; a politician whose success rests not upon craft nor the mastery of technical devices, but simply on the convincing power of his personality; a victorious fighter who has always scorned the use of force; a man of wisdom and humility, armed with resolve and inflexible consistency, who has devoted all his strength to the uplifting of his people and the betterment of their lot; a man who has confronted the brutality of Europe with the dignity of the simple human being, and thus at all time risen superior.
Generations to come, it may be, will scarce believe that such a one as this ever in flesh and blood walked upon this earth” (Albert Einstein, Out of My Later Years, New York, Philosophical Library, 1950).

On your 150th birthday, these words of Einstein appear very true to me, as I wander, if a man like you in flesh and blood really walked upon our soil that has become sore with rejection of all the dreams and ideals you had fought for.

But dear Bapu, exactly as he had observed, “with resolve and inflexible consistency”, we, in Bhasha Andolan, Orissa, have been fighting for managing our Province in our mother tongue Oriya. The anglicized administration has notoriously subjugated us to English and in order to make it permanent, has atrophied the Orissa Official Language Act, 1954 by wrongful insertion of malicious sections, i.e. Section 4 and Section 4A that aims at eliminating our right to run our State in our mother tongue in its entirety.

When, dear Bapu, our ancestors had been fighting for the creation of our province on the basis of our Language, you had supported our demand by saying, “This fine race (the Oriya race) cannot possibly make the natural advance which is its due, if it is kept split up into four divisions for no sound reason” with a strong political observation that our demand for a separate province to be run in our language, “raises the large question of redistribution on linguistic basis” (Young India, 18 Feb.1920).

India is now in an internecine battle over the imposition of Hindi as National Language, as it is anathema to the southern part of the country as well as to us, majority in Orissa, who have been fighting for office work in our mother tongue.

It is you, who had argued that national tongue should not have any domination over the provincial languages. Rather it should be made to have its foundation on the provincial tongue.
You had said,

“Provincial tongue provided the sure foundation on which the edifice of the national tongue should rest” (Harijan 18.8.1946).

Dear Bapu, your stress on learning in the mother tongue was meant to make our rural mothers and sisters rise over ignorance by interacting with the kids getting education in the language they know. Thus had you said:

“What they [students] learn through the mother tongue,they would easily be able to communicate to their mothers and sisters at home and thereby bring the latter into line with themselves. Woman had been described as man’s better half. Today there was a hiatus between the thought world of men and women respectively in India, thanks to the intrusion of the foreign medium. Our women folk were backward and ignorant with the result that, India is today like a patient with paralysis of the better side. India could not realise her full stature unless that handicap was removed” (Ibid).

The time wasted over English

As I go through your views on the language of our people, dear Bapu, I find a philosophy that is uniquely your on the mother tongue. In a letter to Ranchhodlal Patwari on 10.6.1915, you had said,

“Sankar had learned all the languages of India. Vallabh, who belonged to the land of the Dravids, had learnt Gujurati. There are at present hundreds of Gujuratis in Madras who know Tamil. …..It is easy to acquire such proficiency in languages. The time wasted over English will, if saved, be sufficient for the purpose of these other languages.”

English makes us foreigners in our own land

Dearest Bapu, your speech at Banaras Hindu University was no less a canon for us on language, which, sadly, post-independence elitist euphoria has suppressed. I am quoting it from a live report:

“I am hoping that the University will see to it that the youth who come to it will receive their instruction through the medium of their vernaculars. Our language is the reflection of ourselves, and if you tell me that our languages are too poor to express the best thought, then I say that the sooner we are wiped out of existence, the better for us. Is there a man who dreams that English can ever become the national language of India? (Cries of “Never”). Why this handicap on the nation? Just consider for one moment what an unequal race our lads have to run with every English lad. I had the privilege of a close conversation with some Poona Professors. They assured me that, every Indian youth, because he reached his knowledge through the English language,lost at least six precious years of life. Multiply that by the number of students turned out by our schools and colleges and find out for yourselves how many thousand years have been lost to the nation. The charge against us is, that we have no initiative. How can we have any if we are to devote the precious years of our life to the mastery of a foreign language? We fail in this attempt also.

I have heard it said that after all it is English-educated India which is leading and which is doing all the things for the nation. It would be monstrous if it was otherwise. The only education we receive is English education. Surely we must show something for it. But suppose that we had been receiving during the past fifty years education through our vernaculars, what should we have had today? We should have today a free India, we should have our educated men, not as if they were foreigners in their own land but speaking to the heart of our nation;they would be working amongst the poorest of the poor, and whatever they would have gained during the past 50 years would be a heritage for the nation(applause). Today even our wives are not sharers in our thought” (Speech at Banares Hindu University 6.2.1916, Collected works, 13, p.211-12).

Fondness for English detrimental to Swaraj

Your views, dear Bapu, were unambiguously clear on how ‘Our system of education’ was detrimental to achievement off Swaraj. You had, in introducing the ‘Gurukul Number’ of Satdharma Prachark Patrika, wrote on 24.3.1917,

“I am convinced that, as long as we are not free of our fondness for English, we cannot achieve real Swaraj. ……………..And, millions of our brethren who are never likely to learn English will be reduced to slaves and an unbridgeable gulf will form between them and the English educated”.

“Looking at the educated section of our population, one is likely to gain the impression that, in the absence of English, all our works shall come to a stop. But deeper reflection will show that, English cannot, and ought not to, become our national language”,

you had said in your speech at the 2nd Gujurat Educational Conference 20.10.1917.

Coming heavily down upon the controversy the elite class was raising against education in vernacular language, you had said,

“Learning a language is certainly very useful. It also helps in one’s mental growth. But the present practice of teaching the pupils compulsorily through English must be stopped now. The mother tongue should be given proper importance and its development encouraged. It is our country’s misfortune that this plain truth has become the subject of a heated controversy” (A letter dt.23.7.1947 (Bihar Pachhi, Delhi, p.391).

And, your speech at Karachi in the reception given to you on March 2,1916, furthered your philosophy on language. You had said,

“Everyone should receive education through the mother tongue, giving to a foreign language the place merely of an optional subject. No other language can ever influence our life as powerfully as the mother tongue can”.

Dearest Bapu, none but you could have said the truth as truthfully as you said on 1.2.1917 in your introduction to the work of P.J.Mehta captioned “vernaculars as media of education in Indian Schools and Colleges”, that underlined,

“The question of vernaculars as the medium of instruction is of national importance; neglect of the vernacular means national suicide.”

I love you, Bapu, for your love for the mother tongue more than even the emancipation you have given us. Every day be the day of birth dear Bapu.