This menacingly corrupt characterless man was the superintending engineer of irrigation in the Berhampur circle in the Chief Minister’s constituency district, when vigilance police had pounced upon him. He was prosecuted under the Anti-Corruption Act and was found guilty of corruption. The Chief Minister, possibly he was contributing to his party fund, promoted him to SE Level 1 and from that stage to the rank of Chief Engineer.

Misuse of Chief Minister position to promote him despite the vigilance verdict against him is reproduced below for ready reference. 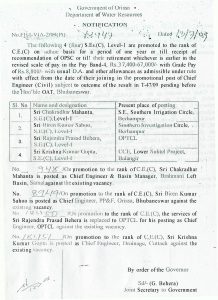 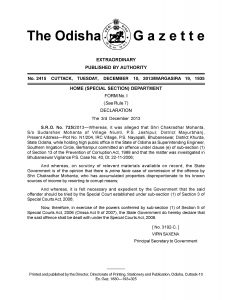 When under the so-called ‘zero-tolerance-to-corruption’ as many as 16 lower rank employees have been punished with obliteration of their source of livelihood yesterday, because, according to the CM, they were found guilty of corruption in vigilance cases, why the high-ranking Chakradhar Mahanta’s pension is not withdrawn as yet; and why he has been helped to enjoy his property accumulated through proven corruption by giving free hand to the prosecuting officer to linger the case in the special court?

Is it because, if the case is expeditiously pursued, the Chief Minister’s impropriety in promoting him to the highest rank despite proven corruption will come to public gaze?

In this sample case, the Chief Minister owes an answer to the people of Orissa. If the Chief Minister fails to say, why Chakradhar Mahanta has been protected so far, better he should stop the farce called zero-tolerance-to-corruption.